Skip to content
Who is responsible? > Oxford Flood Alleviation Scheme

What is the Oxford Flood Alleviation Scheme?

The Environment Agency is working with partners Oxfordshire County Council, Oxford City Council, Vale of White Horse District Council, Thames Water, Thames Regional Flood and Coastal Committee, Oxford Flood Alliance, Oxfordshire Local Enterprise Partnership and University of Oxford on a scheme to reduce flood risk to homes and businesses in Oxford, as well as to services and major transport routes into the city.

Oxford has the second fastest-growing economy of all UK cities and the scheme will keep Oxford open for business and allow this successful economy to continue to thrive.

The scheme will involve lowering parts of the floodplain and working on some of the existing rivers and streams that run through it to make more space for water and reduce flood risk to the city. Some areas will have new flood walls and embankments.

As well as reducing flood risk, the scheme will create 5 hectares of new wildlife habitat and improve existing public footpaths and bridges, creating opportunities for everyone to enjoy the environment and improve health and wellbeing.

Who will benefit from the scheme?

Oxford is home to around 5,300 businesses, provides 133,000 jobs and has approximately 7 million visitors every year. Everyone who lives, works in or visits the city will benefit from the reduced flood risk to the railway and the Botley and Abingdon roads. The scheme will reduce flood risk to homes and businesses to the south and west of the city. There will also be fewer flood related electricity, telephone and internet disruptions to homes and businesses. Over 80 properties will be less likely to experience sewer flooding.

The scheme is designed to reduce the impacts from a major flood. This size of flood has not been seen in Oxford since 1947. If the scheme had been in place during the floods of 2007 and 2013/14, the Abingdon Road, Botley Road and railway would all have remained open.

How will the scheme work?

The scheme will be approximately 5km long, it will run from north of Botley Road down to south of the A423 southern by-pass where it re-joins the River Thames. 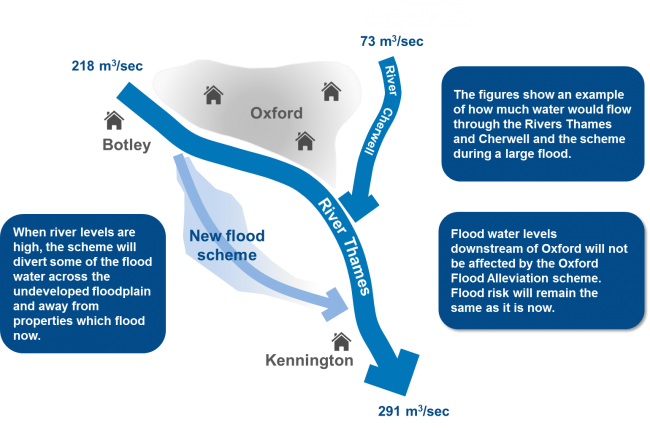 Oxfordshire County Council began the propping work on the A423 Kennington Railway Bridge in July.

Replacement of the A423 Bridge has provided an opportunity to design and build the bridge and the flood scheme together. This allows a reduction to disruption during construction and ensures the best use of public money. The updated design will use open channels instead of culverts to allow the flow of floodwater under the bridge. This will provide a better environment for wildlife and requires less maintenance.

The bridge is at the southern end of the scheme and during a flood, water would need to pass underneath it to re-join the River Thames. This capacity needs to be in place before the scheme is constructed to avoid increasing flood risk elsewhere. There is also a need to have all approvals, including planning permission and the Compulsory Purchase Order secured.

If you’ve been walking near South Hinksey, you may have spotted contractors on site. They are carrying out archaeology surveys in a field near South Hinksey village to check whether the area is suitable to be used as the main compound for when the scheme is constructed.

The archaeology surveys will determine whether there are any historical artefacts in the field. This is to ensure there’s no risk of damaging any artefacts or remains. Once the investigations have finished, the equipment will be removed from the site and fields reinstated.

To complement the new A423 bridge replacement, the design of the scheme around Kendall Copse, near Kennington, is being reviewed.

From 10 August, trial pits will be dug and boreholes drilled to understand the ground conditions beneath the site in order to finalise these designs.

The flood response exercise consisted of:

Due to the current Government guidance on public gatherings, members of the community were unable to be invited to attend.

Updates were shared on Twitter and Facebook as the exercise progressed. Video footage of the temporary barriers and pumps will be shared so you can see the field teams in action.

During the summer months, flood risk might be low on your list of priorities, but Environment Agency officers are thinking about it year-round. Throughout the year our operations staff carry out inspections and clear debris to keep main rivers moving.

You can also find out what maintenance is planned in your area: environment.data.gov.uk/asset-management/index.html

Stay prepared by signing up for flood alerts and preparing a flood plan: https://flood-warning-information.service.gov.uk

More details on the scheme can be found in the Full Outline Business Case and Executive Summary.

This page will be updated as the scheme progresses. You can also keep up-to-date in the following ways: 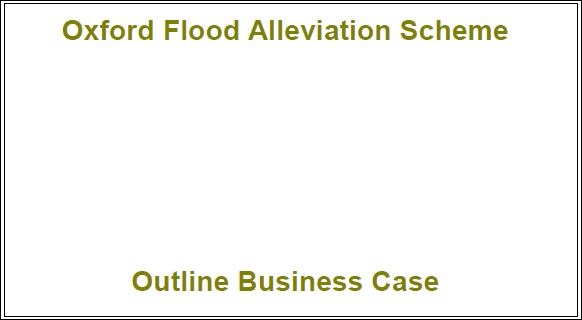